The writer of the Shield and the producer of the Sopranos bring you the most ruthless adrenaline-packed new drama of 2009. With over 40 minutes of unaired scenes, the DVD takes you even deeper in the unexplored world of this outlaw Californian Motorcycle Club as its members struggle to balance family life and weapon-trafficking business

The writer of the Shield and the producer of the Sopranos bring you the most ruthless adrenaline-packed new drama of 2009. With over 40 minutes of unaired scenes, the DVD takes you even deeper in the unexplored world of this outlaw Californian Motorcycle Club as its members struggle to balance family life and weapon-trafficking business

The roar of a motorcycle can signal freedom–or trouble. Sons of Anarchy examines a biker gang from both perspectives, as Jackson “Jax” Teller (Charlie Hunnam, Nicholas Nickleby) struggles between loyalty to the Sons of Anarchy Motorcycle Club, Redwood Originals (aka SAMCRO or “Sam Crow,” which his dead father founded) and doubts about the criminal and often brutal actions the club demands of him. The series opens with a rival gang stealing the Sons' stash of guns and the premature birth of Jax's son, two events that sow questions in Jax's mind about the life he's leading. Over the course of the season, these questions will spark dangerous conflict with the gang's leader, Clay Morrow (Ron Perlman, Hellboy) and with his own mother, Gemma (Katey Sagal, Married with Children), who's now married to Clay. Despite the macho setting, Gemma is the standout character of the first season of Sons of Anarchy: fierce and manipulative, she sets the good of the club (and her own desires) above everything else–even her love for her son. Despite the lingering presence of his junkie ex-wife (Drea de Matteo, The Sopranos), Jax finds himself drawn to his high school sweetheart, Tara Knowles (Maggie Siff, Mad Men), now a doctor, and who saved his son's life.

Throughout the first season of Sons of Anarchy, SAMCRO grapples with a multicultural array of foes: Hispanic bikers, African-American gangbangers, white supremacists, an Asian triad, and agents of the ATF. Uneasy alliances and precarious compromises rarely work out as planned, leading to nail-biting confrontations and headaches for Jax. But the rituals and emotional bonds of the club itself are the real subject of the show–how an institution built on friendship and family loyalty gets twisted by ambition and greed. One particularly compelling story line follows Jax and his best friend, Opie (Ryan Hurst, Remember the Titans), who had stepped away from the gang to make peace with his wife; to help Jax, he reenters the biker life, with horrific consequences. The creator of Sons of Anarchy, Kurt Sutter, was a writer and actor on The Shield, and fans of that show will find a similarly compelling mixture of scheming machinations and compromised morality here, grounded in excellent performances and vivid production. –Bret Fetzer

Stills from Sons of Anarchy: Season One (Click for larger image) 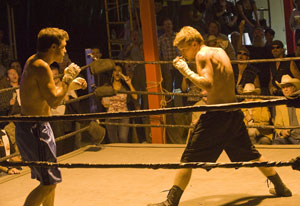 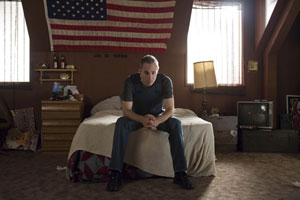 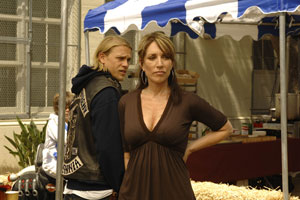 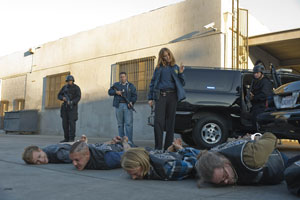 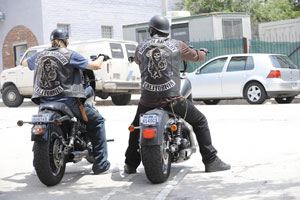 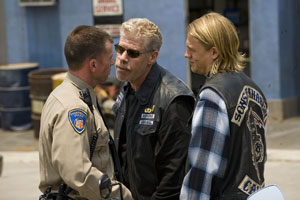 Great show The Shield may be lamentably gone from TV, but prominent alumnus Kurt Sutter seems to have taken it upon himself to carry on its legacy with Sons of Anarchy, and if the show’s first season is any indication he’s more than up to the task. Anyone who enjoyed The Shield’s combination of intelligence and testosterone will certainly find a lot to like here, as SoA quickly established itself as among TV’s most unique and consistently compelling shows and only got better from there. Striking a near-perfect balance between grit and sensationalism, it takes viewers through a world marked by violence, double-dealing, and racial division, with an emphasis on the ambiguous morality and personal and familial baggage that come with a life lived between the straight world and the criminal one. The machinations of the characters and the twists of the plot are almost operatic, but the show remains rooted in the harsh realities of gangland.The premise is sort of…

A Fable for People Who’ve Never Known Real 1 Percenters The timing of Sons is obviously gauged to take advantage of the latest mid-life crisis which requires men my age to buy Harleys and spend their weekends pretending to be outlaw bikers.Sons of Anarchy shows real potential as a worthy successor to episodic brand of voyeurism. Sons offers to take us into the lives of those who live outside the social contracts (or constraints) most of us take for granted. However, unlike The Sopranos, the Sons are not a criminal version of royalty (a status bestowed by endless viewings of .) Instead they are, (as described by another reviewer) “relatable.” These are, for the most part, average joes, who’ve chosen to live outside the requirement to be a part of the herd or to “go along to get along.”Whether we actually…